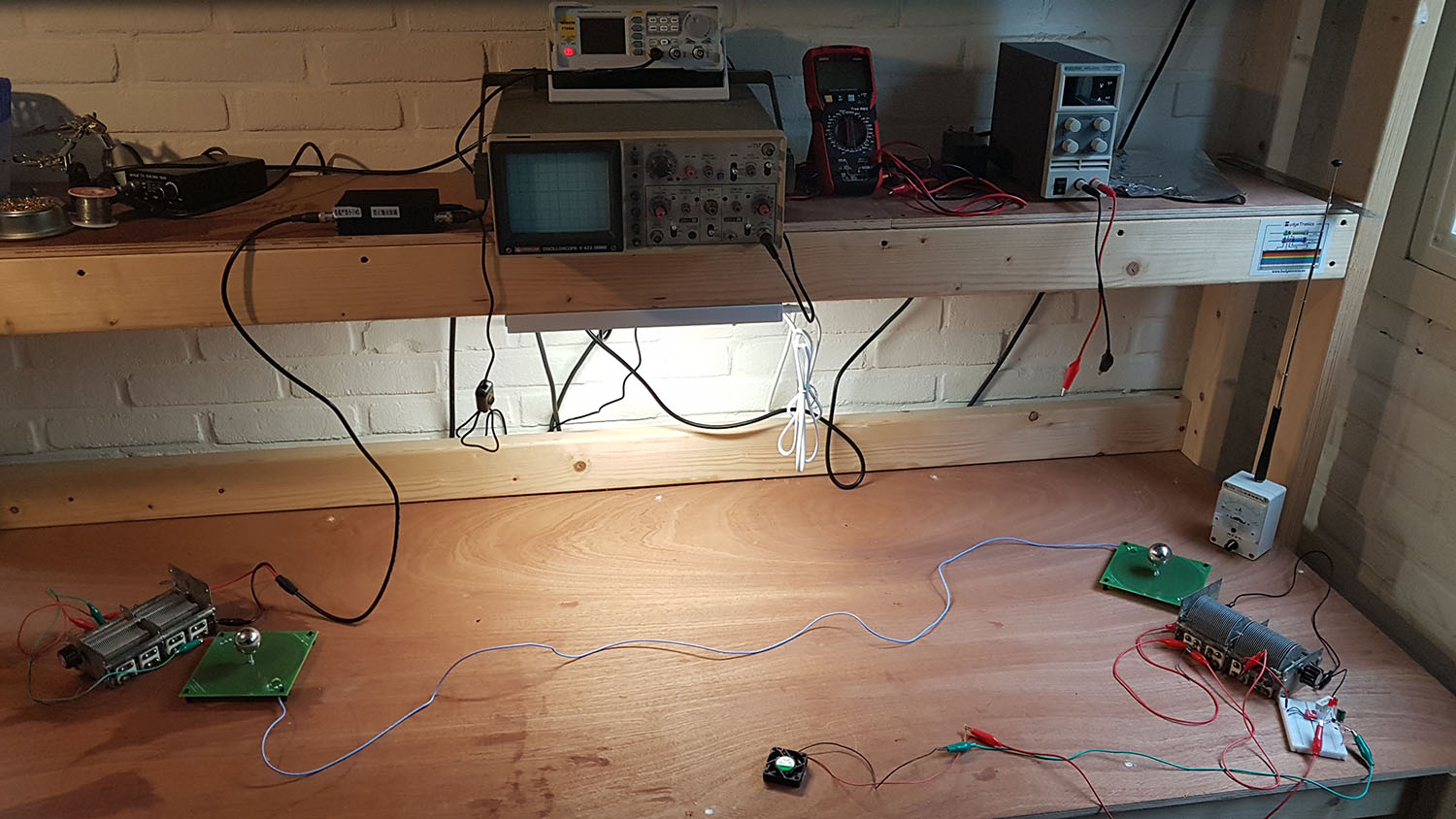 When most people think of a Tesla Coil, they think of big sparks.

This frustrates me to no end…

There are a ton of other cool experiments that can be performed with Tesla Coils, especially if you have a matching pair of them.

In this article I cover 7 cool Tesla Coil experiments for you to try.

Yes, let’s just start with the most basic and obvious one, but with a little twist.

Nikola Tesla, especially in his early days, used his coils to create beautiful sparks in many different variations.

He added all kinds of wire shapes, bulbs, and other accessories to the ends of his coils so he could study different discharge patterns.

Tesla would also hold sparking coils in his hands for a spectacular effect.

Later, he would take the now famous pictures of sparks emanating from his Colorado Springs Magnifying Transmitter.

This photoshoot was mainly so he had something to wow his investors with.

Sparks were not Tesla’s main purpose.

In fact, he tried everything he could to suppress sparks, as they were considered losses in his system.

So get yourself a Tesla Coil, add a sharp metal point, like a piece of wire or a nail to the top of your coil, and push enough power into the system to create a spark.

Just don’t stop with the boring “straight into the air” sparks.

Now let’s do something awesome; let’s make our sparks sing!

And I don’t mean those silly 8-bit Super Mario tunes you always hear from your friendly neighbourhood coiler.

No, I mean real music coming from the spark!

Eric Dollard held a brilliant demonstration of this “flame speaker” at the 2019 Energy Science & Technology Conference.

To achieve this, you need to be able to apply Amplitude Modulation (AM) to your input signal that enters the Tesla Coil primary.

I do this using an FY6900 function generator, which has AM modulation built-in.

On my phone I play a song through Spotify, which goes into a tiny 5V audio amplifier, which then enters my function generator’s VCO IN port.

I then set the function generator to amplitude modulation, and use the VCO IN port as the modulation source.

Finally, I run the signal generator output through an FYA2050S 20W amplifier to have enough power to generate a (small) spark.

Music, real music, can be heard playing from the spark ⚡🎶

Now you’re officially one of the cool kids!

Not many people realise it, but the main purpose of Tesla’s research with his coils focused on transmitting power and radio signals.

Just not the type of radio signals we are used to today.

In his brilliant article The True Wireless, Tesla explains that traditional radios radiate waves into the air.

Only a billionth of the transmitted power is received and then has to be amplified again before the signal can be used to play over your speakers.

Tesla intended to transmit his radio signals through the earth, in which case hardly any power was lost during transmission.

He therefore did everything he could to minimize the amount of radiated waves, as these were seen by Tesla as system losses.

So while the Tesla Coil is on purpose terrible at transmitting radio waves through the air, you can still receive them if you’re close enough.

We’ll need the same setup from the flame speaker experiment + an AM radio (I found an old Grundig Yacht Boy 217 in my parents’ house).

Then we’ll need to tune our Tesla Coil to within the AM frequency band supported by our radio, which is 520 – 1610 kHz in my case.

When you now push your amplitude modulated wave through your coil and tune your radio to the same frequency, you’ll hear the song coming from your radio!

Now if you want to follow Tesla more closely, you could ram a few 3 meter long ground rods into your backyard, and connect your Tesla Coil to it to transmit into the ground.

You could now use your radio, with its antenna connected to a ground rod further away, to receive the signal through the ground.

In fact, if you have an AM radio station nearby, you could even receive their signal, and even some of their broadcast power, through the ground, using a Tesla Coil tuned to their frequency.

For more on this, check out Eric Dollard’s Crystal Radio Initiative.

When a Tesla Coil is in resonance, the voltage peak is situated near the coil’s top load, which is why sparks discharge from there.

A nice way to visualize the actual voltage rise along the coil is by attaching a small neon bulb to the end of a non-conducting stick.

One leg of the bulb should point outward, and the other should ideally be connected to the stick with aluminium tape, which then creates a mini top load for the bulb so a voltage difference will appear across its legs.

When you now move the bulb’s pointy leg along the length of the coil, you will see it light up brighter and brighter as it nears the top.

We can do a similar thing with the current in the coil.

For this, we need a magnetic pickup, which is basically a coil of wire on an iron core, and an oscilloscope.

Connect the pickup to your scope and move it along the length of the coil, like we did with the bulb.

This time, you will find that the current peak is actually near the ground terminal of your coil, and the current low point near the top load.

The reason for this is that voltage and current are 90º out of phase, and since the Tesla Coil is a 1/4 wave resonator, current and voltage peaks end up on opposite sides.

So while this may not be the most exciting experiment you’ve ever done, it definitely is an educational one.

Another favorite pastime of coilers is to hold a fluorescent bulb or tube near their coils to see them light up in their hands, without any direct electrical connection.

I admit, this is fun to do, and Tesla performed similar demonstrations.

It is important to note here that Tesla did not intend to use this method of wireless power on a scale larger than inside a room, as it is highly inefficient.

It was used more as a party trick.

Now on to some rather peculiar experiments whose results are not so easy to explain.

So, you know how they always teach you that current only flows if there is a closed circuit?

Well, we’re going to light an incandescent light bulb from a single wire, without a return!!

Why not use LEDs or neon bulbs?

Because an incandescent bulb is harder to light, and needs a reasonable amount of current to flow, so is much more impressive.

It will show that loads can be powered with an open circuit!

For a coil powered with just a signal generator, you can use tiny 1.5V or 3V grain of rice bulbs.

If you have a bit more power at your disposal, try using 240V 15W oven bulbs.

Hold the bulb against the ground connection of your running coil andddd…. nothing happens…

Now, attach a piece of wire or aluminium foil to the other terminal of the lamp and behold, it lights up!

The piece of wire or foil acts as a capacity, or “elastic reservoir” as Tesla described it, allowing the current to oscillate back and forth through the load.

NOTE: this will NOT work with a Slayer Exciter type circuit, as those use the ground connection of the secondary for feedback, and so it is not free to attach a bulb to. You will need a traditional Tesla Coil setup, where the ground terminal is actually connected to the ground.

In the previous experiment we already saw that we could light an incandescent bulb from a single wire without a return.

Now we take that a step further and transmit power to a second receiver coil.

There we convert it back to a regular closed circuit current and power a small motor with it.

The cheapest and fastest way to create a transmitter / receiver pair of Tesla Coils is to purchase some PCB coils, like this one or this one.

You will also need some capacitors (ideally a variable capacitor as well) to tune the primary coils to the same frequency as the secondary coils for optimal efficiency in power transfer.

Place the coils a good distance apart and connect their ground connections using a single wire.

On the receiver end, add a full-wave bridge rectifier with a smoothing capacitor to convert the high-frequency current to DC.

I recommend using 1N4148 diodes for the bridge rectifier of low power coils, as they are fast enough to handle a few MHz.

Finally, connect a small 12V computer fan to it as a load, or any other small DC load of your choosing, and see it come to life when you get the tuning of your coils exactly right!

Congrats, you just proved it is possible to transmit power over a single wire without a return, and then use it to power a regular load!

If you would replace the single wire between the two coils with the earth, then you get what Tesla’s ultimate goal was with this technology.

He wanted to transmit power around the world using the earth as the “wire”.

This was his True Wireless.

After reading and performing these Tesla Coil experiments, I hope you now realize that Tesla didn’t invent his coils just to make sparks.

Support this research on Patreon! 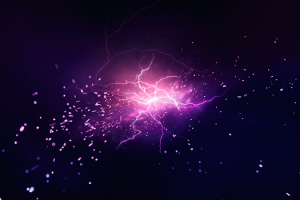 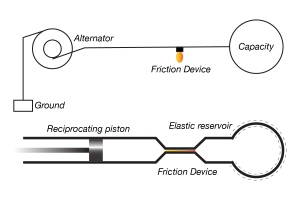 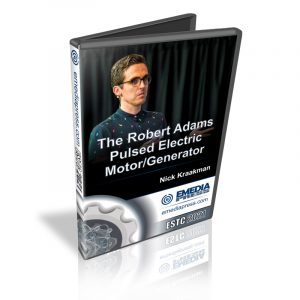